It used to be dedicated to Saint-Vigor. Listed a place of historic interest from 1846 to 1878. Admission free.

Built in the 16th century, overlooking the walls of the city, the church dominates the rivers Eure and Seine. It crowns the medieval vault shaped by Crosne Tower and the walls. These features give our city a specific outline that makes one know Pont-de-l’Arche among a thousand cities. The best views on the church are from the banks of the river Eure, quai-Foch, and Beauregard lane (such a good name for it!). 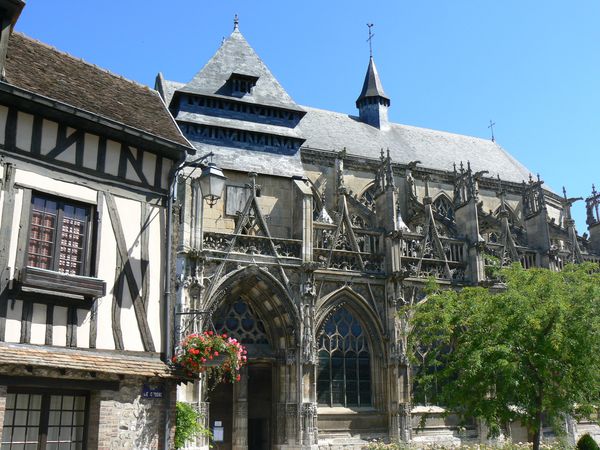 You may compare the church in Pont-de-l’Arche to the one in Louviers. It was not completed, but it stands out because of a magnificent South façade. The latter shows stonework which really looks like lace; it was restored from 1865 to 1895 by MMrs Simon, an architect in Rouen, and Lefort, an architect from the Historic monuments in Seine-Maritime. The gothic building may have inspired Eustache-Hyacinthe Langlois, a native of Pont-de-l’Arche, who started speaking of « flamboyant Gothic style », referring the boldly-shaped sculptures at the windows which suggest flames. The buttresses between the windows are in fat the piers of the flying buttresses.

The building consists of only one nave with six bays bordered by two aisles. The uncompleted apse accounts for the small size of the choir. The elevation inside the church is built on two floors. Two rows of windows bring in plenty of light, which reveals quite plain stonework. This stained-glass window is the most reputed in the church. It was achieved in 1605 by a glassworker from Rouen. The humblest people in the city put up money for it and it shows how important the towing of boats on the Seine was, (people had to tow them under an arch of the bridge). Thus, in the foreground, the window shows the “fort de Limaie”, which stood on the right bank of the Seine (where Igoville is now). In the middleground, there is the bridge which gave the city its name, and in the background, the first walls which were built around Pont-de-l’Arche.

In the foreground, on the right of the fort, you can see the towers (men, women, children) in their best clothes. You can see horses too. On the bridge, there is “the bridgemaster” who, as he watched the boat going under the big arch, directed the towers so that they prevented the boat from crashing into the piers of the bridge. That hazardous daily mission gave the local people work and it was opportunity for the authorities to collect taxes. Towing under the bridge ceased when a lock was made (it was opened in 1811). It came to an end all along the banks of the Seine when boats were motorised.

The church shelters an organ built in 1608 by Jean Oury in Crépin Carlier’s workshop (he being an organ-builder in Rouen). The retables come from Notre-Dame de Bonport. The sculptures represent lions which probably refer to Richard the Lionheart, who founded the abbey in 1190. The church in Pont-de-l’Arche had been dedicated to St. Vigor, the bishop of Bayeux, since at least of the 11th century. The present church maintained his memory, for he was considered as a champion of Christianisation in Bayeux area up to 1893.

That year, Philippe Octave, the parish priest, decided to celebrate Virgin Mary, patron of the arts. The work and contemplation demanded by the art are viewed as a way to make the humanity in men develop. With the support of the duchess of Uzès and a number of religious, conservative authorities, that worship of the Virgin brought an intense religious activity in Pont-de-l’Arche, up to the Second World War. Afterwards it gradually faded.